The tactical RPG qualities of KINETIK mean you'll need to understand each class' strengths and weaknesses. The STEALTH player class - which we will break down in detail this Tuesday - is shown here playing alongside an ASSAULT class drone. #rpggames #videogames #thirdpersonshooter #xboxone #steamearlyaccess #Drones #tacticalshooter #IndieGame #unrealengine4

In our latest update, programmer Kevin McPherson has added lots of options to NPC patrol routes, allowing us to give players more variety in their encounters. For non-wave missions this kind of variety is critical, especially for stealth class players (shown in video), who will have to study NPC movements carefully to avoid being detected. These patrol improvements will have NPCs overlap more often, run routes at different speeds, and spawn in varying group sizes. More info

Lighting is a key part of video games like KINETIK, so we always make sure to run lighting tests of our characters and NPCs every time the environmental lighting is changed by artist Mat Broome (H1Z1, DC UNIVERSE ONLINE). Here we get a look at the details of a full Assault class gear set running around in one of our larger maps. In future editions of our Making the Game vlog, Mat will be offering in-depth lighting tips for other devs taking advantage of Unreal Engine 4. #un

Join us on Facebook, where we're talking about the latest gameplay improvements for KINETIK. This includes better AI and wave combat gameplay. Wave combat missions will be ideal for XP farming in the abandoned lunar facilities of KINETIK, helping you level more quickly to unlock new recipes and character buffs. In the above footage we are making sure to approach the NPCs from multiple angles with the help of our commandable Drone. The heat maps from these sessions are then

Mutated by bombardment with K-Tech, Goliath is the first of KINETIK's bosses and presents a huge challenge to players. In the coming weeks we'll be presenting a look at his attacks, weaknesses, and more. KINETIK brings you tactical RPG shooter action, set on a colonized moon base in the near-future. Sign up for the newsletter HERE to be notified when we expand access to our closed BETA! #unrealengine4 #indiedevelopers #rpg #TACTICALSHOOTER 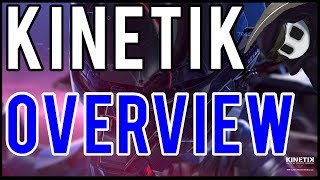 Great Overview of KINETIK by DeathsProxy

Thanks to Youtuber DeathsProxy, you can get a great overview of KINETIK's features, including the tactical shooter, RPG, and space survival elements that make KINETIK such a unique gaming experience. Make sure to subscribe to our YouTube channel and newsletter for more gameplay breakdowns and Beta testing details as we head towards EA this year! #betatesting #steamearlyaccess #INDIEGAME #unrealengine4 #xboxone

Hero Machine's Creative Director Mat Broome (H1Z1, DC Universe Online) has been hard at work polishing the look of KINETIK, making sure that our visuals match the story of a post-war lunar landscape, where threats to survival lurk around every corner. The abandoned, military lunar facilities of KINETIK offer plenty of gameplay options and crucial decisions for survival game fans. Players will hunt down rare NPCs for special rewards, use fuses to restore power to lighting, col

We are in what I like to call the down slope of the concept in part 2. Use a proper value range based on real world materials I prefer to gather material reference in the form of photos, machinery sites and metal manufacturers and cross reference them in different lighting for post look and feel. The real work materials are then used for histogram and level reference in Unreal to be later turned into roughness, metallic and levels reference. Be careful at this time to not sta

Let's get right to it and break down each step in sequence. Break it down fast the design will change First I did a super fast 5 minute sketch of the overall form, I find I really like to sketche quick to get a sense of speed and movement. I find things get stiff if you overthink the initial flow of the sketch. This is likely due to my comics and illustration background. Reference is key This is of course after doing my homework and grabbing key images that support the charac

Creative Director/character artist for KINETIK Mat Broome (H1Z1, DC Universe Online) shared a sneak peek at one of the playable, customizable characters you'll be taking control of in KINETIK. This 4K image is part of upcoming Making the Game episodes dedicated to creating playable characters with unique visual depth and impressive attention to detail, helping gamers immerse in their experience. Aspiring game devs make sure you follow the series and ask any questions. KINET

The eyes are no doubt the center to the soul, the keys to communicating and critical to life in the form. But I find doing the mouth cavity first for some reason a great place to get warmed up and it really helps me think through a few key stages early. The age of the character, the ethnicity of the character and lastly their career. Age before Beauty The age for me comes first, because this character is a young thirty year old, so his skin is youthful but also he's spent mos

Making the Game Ep 001: Breaking Down the Eyes

Let's get Right to it Areas of focus for shapes are everything, I have to be careful every time I do a new sculpt to not overwork the surface at the beginning. Why? It's simple - the best way to do art and design is to use base shapes to establish the form, and the additional details to reinforce structure. This rule works for any kind of art you might be doing. Concepting and Sculpting key areas is critical. 3 steps of concern now are the planes for lighting, structure and o

This Behind the Scenes devlog series [ let's call this a documentary] is to show the ups and the DOWNS of one artist's journey to make all the game assets - from characters to environments - for Hero Machine Studios' survival game KINETIK. We will be starting with the concept sketch and then moving through every stage including the material work in Unreal Engine 4. I'm going to show how I'm using my time to do everything from concept to real time integration, I hope you enjoy

KINETIK: Art Behind the Scenes Episode: 001

Why Behind the Scenes? KINETIK is personal, and my life's mission to challenge myself in art, science and discipline to higher and higher levels. This Behind the Scenes Devlog [ let's call this a documentary] is to show the ups and the DOWNS of this journey to make all the game assets, from characters to environments as one artist. The Process. The entire game takes the whole team, Lead Engineer Kevin McPherson and Lead Technical Designer Stephen Broome, with the expertise of 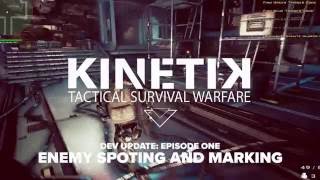 As a tactical RPG shooter KINETIK is constantly play tested and adjusted to ensure that the tactical component is seamless integrated with classic shooter mechanics. One such integrated feature is the ability to quickly mark your enemies, allowing your drone companion or Co-op/Multiplayer squad maters to recognize the particular target of your instructions. Make sure you subscribe to the YouTube channel for weekly content including gameplay updates, behind the scenes art se 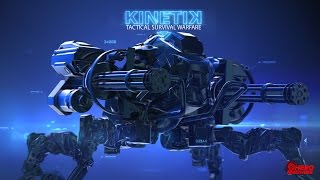 The first ever release of 60 FPS tactical shooter gameplay footage from KINETIK is up, as we continue developing the game for Steam Early Access testing in 2017. The newest footage shows the game's 60 FPS frame rate, some of the destructible elements you'll be using to your advantage, and the availability of both first and third person cameras. All made in Unreal Engine 4. Stay tuned for regular art and gameplay updates as part of our Game Development Blog series. #unreale